Among the great personalities who have passed through the Chambley aerodrome, we can mention Bertrand PICCARD, Don PICCARD, Jean-François CLERVOY, Gérard FELDZER, Bob SISK, the organizers of the greatest balloon events on the planet, etc. Each edition has its prestigious guests. But a long time before the Grand Est Mondial Air Ballons, an illustrious figure came in the person of General Michael (Mike) Collins.

On July 21, 1969, 52 years ago, Neil Armstrong first set foot on the Moon during the space mission Apollo 11. With him, in the mother ship, “Buzz” Aldrin and “Mike” Collins. The history of the latter remains forever linked to the Chambley base. He even declared “to have spent the three most wonderful years of his life in Chambley”. But why does an American fighter pilot, promised to a great destiny, have such memories? Explanations. 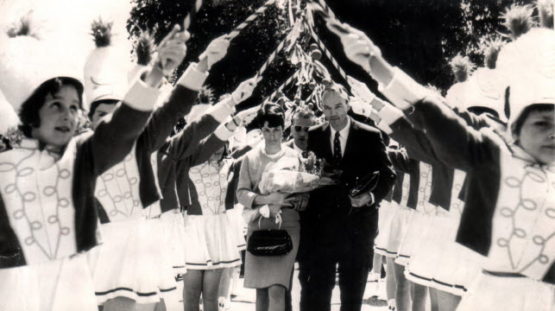 Michael Collins, the “third man” of the Apollo 11 mission, did not walk on the moon on July 21, 1969. But the astronaut contributed greatly to the fame of the village and of the Nato air base where he served with the 72nd Fighter Bomber Squadron (FBS) from 1954 to 1957 and where he got married to Patricia Finnegan in 1957 in the small air base chapel.
Over that period, some 3,000 American soldiers animated the base and the surrounding villages, including Chambley which greatly benefited from this dynamism.
At that time, Chambley had no less than two bakeries, two carpenters, two hairdressers, a butcher, a garage with a gas pump, a tobacconist’s, a restaurant, a grocery store…! 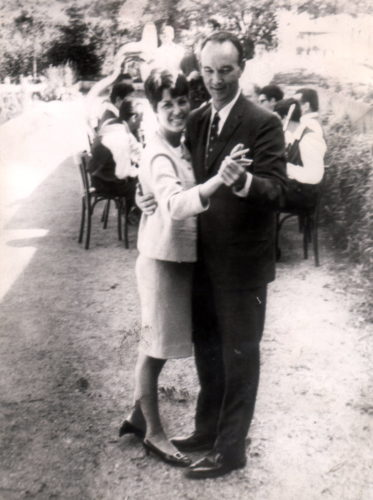 On May 28, 1967, on the occasion of the International Paris Air Show, the couple returned to Lorraine and, crowned with glory after the success of the Gemini 10 space mission, they confided in the columns of the Républicain Lorrain, the regional newspaper.
Michael Collins recalled his youth, when he was a fighter pilot with the 21st FBW trained at George Air Force Base in California, and was posted to Chambley with his unit from 1954 to 1957, in the context of the Cold War at the time. “Twice in space, as far as I can remember, I thought of Chambley to which I owe so much: my job, the fame I got from it and especially my wife whom I met here”.

In the 1990’s, Philippe Buron Pilâtre, founder of the Grand Est Mondial Air Ballons, already exchanged letters with the astronaut to invite him to the event. The last one answered him by assuring him of his encouragement for the rehabilitation of the former Nato base and for the organization of the #GEMAB.
To this day, Collins has never returned, but the aerodrome retains the memory of his passage since his name was given to the auditorium of the Aerodrome, managed by Pilâtre de Rozier Organisation.

The chapel, which saw the union of the Collins, is still standing and hosts the two Sunday masses during the Grand Est Mondial Air Ballons.

The Great Line: a shared dream